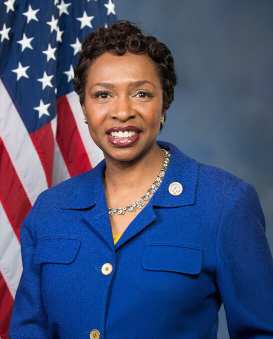 Yvette D. Clarke, African-American Congresswoman of Jamaican heritage, will inspire and further empower approximately 700 graduates of the University of the Commonwealth Caribbean (UCC) at its 25th Commencement Service, when she delivers her keynote address to the Class of 2018, on Sunday, July 22, 2018 at 2:00 p.m. in the National Arena in Kingston, Jamaica. The graduands will receive diplomas for successfully completing a range of Masters and Bachelor degree programmes, along with other professional certifications.

Congresswoman Yvette D. Clarke, who represents the (NY-09) Ninth Congressional District in Brooklyn, New York will also receive an Honorary Doctorate in Public Policy from the University. The theme of this year’s Commencement Ceremony is ‘A Purpose to Fulfil: A Destiny to Embrace.’ Jamaica’s Minister of Education, Youth and Information, Senator the Honourable Ruel Reid, will also address the expected capacity audience of some 5,000 attendees.

The Congresswoman’s travel to UCC to receive this honour was formally approved by the U.S. House of Representatives Ethics Committee recently. She is the sixth Jamaican or American of Jamaican heritage, to be so honoured by the University. Previous honourees include: Professor Errol Morrison, former UTECH President; Mr. Bruce Bowen, former President and CEO of the Scotiabank Group Jamaica; Mr. Richard Byles, former President and CEO of the Sagicor Group; Professor the Honourable Henry Lowe, Executive Chairman of the Environmental Health Foundation of Jamaica; and Mr. Gary “Butch” Hendrickson, Chairman and CEO of the Continental Baking Company Limited.

As an advocate, a community organizer, and now a legislator, Congresswoman Clarke’s boldness, compassion and love for the people has allowed her to become an effective leader and an outspoken advocate concerning numerous issues of great importance to her constituents.

“We are most honoured to welcome Congresswoman Yvette D. Clarke to our University to receive this well-deserved award. I know her address to the Class of 2018 will undoubtedly leave an indelible mark on our graduates,” said Dr Winston Adams, UCC’s Founder and Group Executive Chairman.

Chairman of the UCC Board of Directors and Executive Chancellor, Professor Dennis J. Gayle, also commented that Congresswoman Clarke’s presence, and her keynote address, would enrich UCC’s 25th Commencement Ceremony, and be long remembered by all participants and guests.

According to UCC’s first Chancellor and former Governor General of Jamaica, now Special Advisor to the UCC Board of Directors, The Most Honourable Professor Sir Kenneth Hall, “the acceptance of the invitation extended to Congresswoman Clarke sends a powerful message about the links between Jamaica and the Diaspora, and Jamaica’s efforts to strengthen its relations with the United States. Given her high ranking in the U.S. House of Representatives and the range of her responsibilities, her presence and address to the graduates will further enhance the reputation of UCC and inspire all the graduates”.

More recently, she co-sponsored the Community College Student Success Act, in the US House of Representatives, a bill that would create a national version of the City University of New York’s Accelerated Study in Associate Programs (ASAP) to support students, including Jamaican & other Caribbean nationals, attending community colleges across the United States. The act will provide resources to public community colleges across the country, with priority for underserved colleges with high percentages of low-income & minority students.

UCC, the largest non-affiliated privately owned university in the Commonwealth Caribbean, is internationally accredited by the UK based Accreditation Services of Independent Colleges & Universities (ASIC).