Inmates, warders to get tertiary scholarships

Inmates, warders to get tertiary scholarships 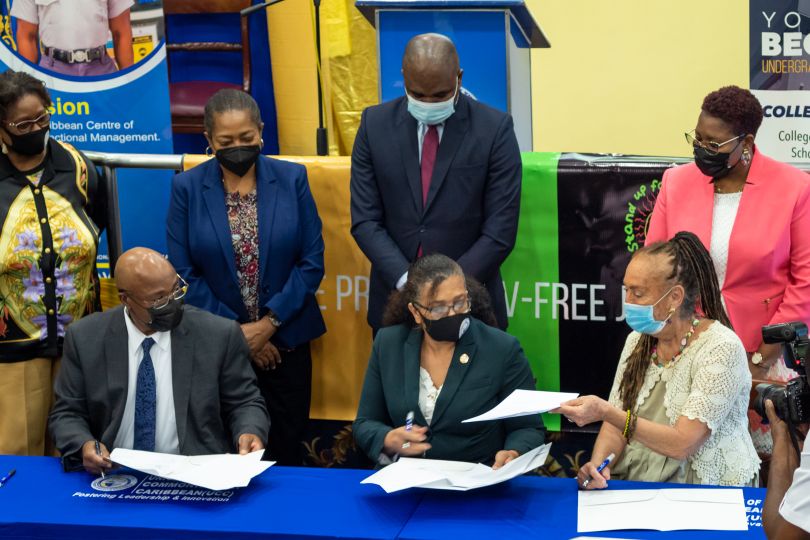 Four additional inmates and two correctional officers from the St Catherine Adult Correctional Centre are being given full scholarships to pursue a Bachelor of Business Administration at the University of the Commonwealth Caribbean (UCC).

This is being made possible under a programme extended yesterday with the signing of a memorandum of understanding by the Ministry of National Security, the Department of Correctional Services (DCS), the UCC, and human-rights lobby Stand Up For Jamaica.

Under the initiative, the UCC will cover tuition, application and miscellaneous fees, while the DCS and Stand Up For Jamaica have committed to providing an equipped computer lab, books, and other materials as well as student support services for the participants.

Speaking at the signing ceremony at the UCC’s main campus in St Andrew yesterday, Commissioner of Corrections Lt Gen (Ret’d) Gary Rowe said that the continued partnership signifies the DCS’s commitment to ensuring that inmates have access to higher education and rehabilitation even as it also looks after the welfare of officers within the institutions.

Rowe said that within the DCS, there are passionate advocates who believe that education is the key to success and that if given the opportunity to develop themselves, inmates can make a positive contribution to the growth and development of the country upon release.

“The department is committed and will ensure that this project is successfully executed,” Rowe said.

“ ... Opportunities like these give them a chance to redeem themselves so that ... when their time would have come to an end, they are in a position to move back into society, [giving] them a greater ability to reintegrate into the wider society,” he said.

In 2020, the St Catherine Adult Correctional Centre launched a pilot programme that provided full-tuition scholarships to four inmates and one correctional officer.

Mayne appealed to members of the private sector, other educational institutions, and non-profit organisations to help the DCS to launch more of these programmes to equip inmates with the tools to successfully reintegrate and reduce the number of re-offenders with four out of every 10 people who have gone through the penal system were likely to return.

“There is a concern for us, and we recognise that we need to expose our inmates to rehabilitation programmes that will eliminate if not substantially reduce the possibilities of them reoffending,” he said.

Through the educational rehabilitation programmes implemented by the DCS, Mayne reported that up to December 2021, one hundred and sixty-three wards were engaged in academic and vocational activities administered by 20 civilian teachers and instructors.

He believes that adult inmates should be ordered to enrol in vocational and academic programmes.

“The time has come; we have to start the conversation. We have to raise the conversation ... . As a sentencing order, convicts ought to be mandated to participate in rehabilitation programmes,” he added.

“Today, we are not only increasing the literacy of inmates, but building self-esteem and giving them hope – hope of a better future and becoming a better version of themselves while they have served their time and released back in the wider society,” said the state minister.

Dr Yvonne Dawkins, associate vice-president for academic affairs at the UCC, said that a new phase of the programme would be launched in the future to include female juveniles from the South Camp Juvenile Correctional and Remand Centre for Girls, targeting a larger number of inmates.